at University of Texas at El Paso

Thank you to our sponsors, the UTEP Recreational Sports Department!

As Alpha Xi Deltas, we are very proud of our efforts to raise not only funds, but also awareness of our national philanthropy Autism Speaks across our collegiate campus as well as the El Paso community as a whole. Each semester we put on at least one event in an effort to raise awareness for philanthropy that we hold so dear to our hearts.

AmaXing Challenges are events put on by Alpha Xi Delta chapters all across the nation. Such events are Football FrenXi, Karaoke for a Cause, Puzzlepalooza, Step it Up 5K and Xi Man. Each AmaXing Challenge has its own spin on raising funds and awareness for Autism Speaks. Although many chapters across the nation usually stick to an annual AmaXing Challenge, the Iota Eta chapter at UTEP has pride in offering a variety of these events each and every year. In doing so, we get the chance to engage the campus community and the El Paso community in different events where they look forward to knowing we will continue to be different. 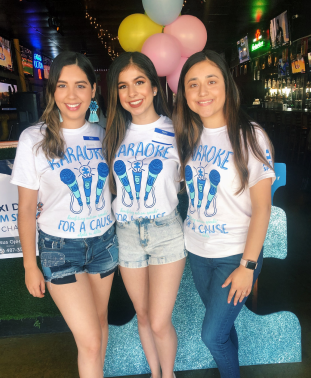 Football FrenXi is a flag football tournament comprised of about 7 teams. The tournament is played recreationally rather than for a big prize all for the purpose of donating money to Autism Speaks.

Karaoke for a Cause

Karaoke for a cause is an event just like it sounds, a Karaoke Competition. People from the campus community as well as the El Paso community in general are welcome to compete. In the past we have had MC’s like a popular El Paso radio personality Monica Castillo. This is a fun way to sing songs and become the pop star you always wish you could be.

Xi Man a male pageant that typically has a large turnout from the Greek males on campus. Each contestant was required to create a profile on a website we created specifically for the event. On that website people could electronically make donations to Autism Speaks making fundraising a large amount of money that much more attainable. In addition, the contestants had side competitions leading up to the actual event. Additionally the contestants participated in a traditional style pageant competition that consisted of talent portions, formal wear, and a chance to show their passion for Autism Speaks. Last semester we raised over $3,000 making this event truly successful compared to other philanthropy events in the past.

Puzzle Palooza is another team-oriented event that consists of a puzzle making competition and a carnival on the side. The actual completion is a timed race to see which team can construct and finish a puzzle the fastest. While teams were competing, there was a carnival set-up where children and other community members played traditional fair games.

Xi Marks the Spot is an AmaXing Challenge where teams are formed and compete in a campus wide search and find event in which they find items all around campus usually contacting an Autism fact so that they can become more aware about Autism. The fastest team to find all the items and facts wins the event.

Step it Up 5K is the event we will be doing this semester, Spring 2015. This is an event in which people from the UTEP and El Paso community come out and run a 5K race to support people they may know with Autism or just to support the cause because they hold it close to their heart. Although there is the 5K run, we also have a choice for people just to do a walk in an effort to support the cause.

Not only does Alpha Xi Delta hold big events every semester, we also table on campus in order to raise more awareness for our philanthropy. In past years, we have challenged people on campus to come up to our table and take a picture with a puzzle piece that has an Autism fact on it and encourage them to post their picture on social media. We use the overwhelming popularity of social media to our advantage in an effort to spread as much awareness as possible.